October is Down Syndrome Awareness Month--a month to celebrate the lives and stories of individuals with Down syndrome and the beauty of each one. Our sweet son Benjamin is no exception. He has brought joy to our family and to the lives of so many others who know him, and I am proud to call him my son! 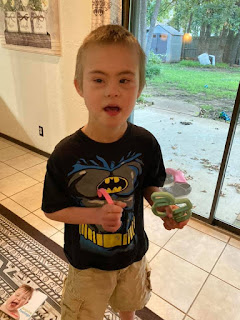 I will, however, be taking this blog post in a rather unexpected direction today, as something has been weighing heavily on my heart. While this is a month to celebrate the LIVES of people with Down syndrome, the heartbreaking reality is that many of these precious lives were never even given the chance to live. According to an article by The Tennessean, "The best calculations suggest that 67% of US pregnancies where it is suggested that the baby would be born with Down syndrome end in abortion."  The seeming prevalence of Down syndrome related abortions has even led some states to seek passage of legislation that would prohibit abortions solely based on a pre-natal diagnosis of Down syndrome. Of course many cry "foul" at such laws, claiming they unfairly limit a woman's "right" to an abortion. Others say (rightfully so) that it is a form of discrimination to end the life of a child through abortion simply because they have a disability. Yet let's take a moment to consider what legislation like this is really saying...

If it is discrimination to abort a child due to a disability, then clearly that child is a PERSON who has rights and is deserving of protection. This immediately blasts a hole in the entire abortion debate. If it is wrong to end the life of a pre-born baby due to a disability, then WHY ON EARTH would it be okay to end the life of a pre-born baby who does not have a disability? The baby in the womb cannot be considered a person in only select circumstances but not in others for convenience sake. Human beings give birth to human beings. The baby inside the womb is just as human as the baby outside the womb. Abortion ends a human life. Abortion. Is. Murder. 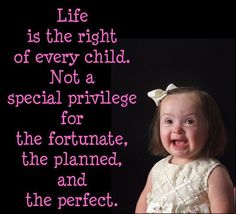 This brings me to my next point. In addition to all the euphemisms about it being "the woman's body" and "the woman's choice," one of the most trumpeted arguments favoring abortion is "Well, you can't legislate morality." Is that so? Well how is it then that we have any laws? By their very nature, laws are more often than not the legislation of morality. We have laws that prohibit theft, rape, murder, fraud, domestic violence, child abuse, etc. All of these are moral issues, and we rightly have a system of laws in place to seek to protect against such behaviors. When these laws are violated, consequences are to follow. Without the legislation of morality we would live in frightening anarchy.

On a side note, many of the laws we have are rooted (whether intentionally or not) in the wisdom of the 10 Commandments found in scripture. I believe that much of the breakdown we have seen in our society in recent generations has been because we have moved further and further away from God's commandments, which are not meant to be a hindrance but a protection. For example, how much heartache would be avoided in the lives of countless families and individuals if we followed the wisdom of God's law to not commit adultery?

Since the Garden of Eden, Satan has been waging war against women and against her seed. All throughout human history he has sought to destroy the fruit of the womb. When the ancient Israelites were enslaved in Egypt, Satan worked through Pharaoh with the evil decree to throw all the newborn Hebrew baby boys into the Nile River. After taking possession of the Promised Land, Israel would later come under God's judgement for their adoption of the wicked pagan practices of the nations around them--one of the most horrific being child sacrifice.
"You shall not worship the Lord your God that way; for every abomination to the Lord which He hates they have done to their gods; for they even burn their sons and daughters in the fire to their gods."
Deuteronomy 12:31
"But they mingled with the Gentiles and learned their works; they served their idols which became a snare to them. They even sacrificed their sons and daughters to demons, and shed innocent blood, the blood of their sons and daughters, whom they sacrificed to the idols of Canaan; and the land was polluted with blood."
Psalm 106:35-38
In the New Testament we see King Herod issue the death decree against every male child two years old and under in his demonic attempt to kill the baby Jesus. History itself is littered with horrific human rights abuses and genocide, including infants and children. Over 61 MILLION babies have been aborted in the US since the fateful passage of Roe vs. Wade in 1973. Are we any less barbaric than the ancient pagan practices of child sacrifice? Living babies are violently suctioned, ripped apart piece by piece, poisoned, and chemically burned in our various methods of "women's healthcare." Satan has destroyed generations through our legalized murder as the world triumphantly cheers that we are "empowering women." God have mercy on us!
Another widespread argument used to justify legalized abortion is that if we do abolish it, women will still seek abortion and many will die from "back alley" abortions and unsanitary conditions. The premise of this argument has already been refuted (see here ). Also, though it often goes unreported, women still die from complications related to "safe and legal" abortions. Still the logic goes, "If women are going to do it anyway, we better make it legal so we can make it safer." Let's dig a little deeper into this rationale...
I am going to lay out a perfectly OUTRAGEOUS idea with the hopes of illustrating just how ridiculous this argument really is. Rape is against the law. Rape is violence against another human being. Rape results in mental, emotional and physical harm to the victim. Rape can result in unwanted pregnancy. Rape is against the law, yet we all know that evil individuals will still rape and women will still be hurt. So, in order to better protect women should we set up legalized "rape centers?" Should there be places where assailants could take birth control measures and women would have immediate access to physical and mental healthcare following an assault? Of course we don't want anyone to be raped, but since we know it's going to happen regardless, shouldn't we provide some legal "safety nets" to limit the damage done? Would this cause rape numbers to go down or only further incentivize the brutality? I fully realize how absolutely PREPOSTEROUS this analogy is, but is it really any less unconscionable that we think it's necessary to make the widespread murder of innocent babies legal as a "safeguard" to protect women? (On another side note, allowing abortion in the case of rape is not the answer. Sentencing an innocent child to death for the sin of the father is horrific and the violence and trauma of abortion often only ADDS to the woman's mental/emotional and even physical harm).
Legalizing the murder of babies will only lead to more widespread murder of babies--over 61 MILLION! Instead of funding abortion, why not channel resources into pregnancy care centers, adoption agencies, etc.? Don't pit the mother against the baby. Love them BOTH. 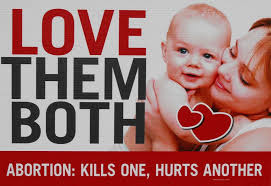 Finally, many prefer to go the route of neutrality, claiming "I'm personally against abortion, but who am I to tell someone else what they can or cannot do?" To those I would ask, "Do you believe abortion ends the life of a human being?" If your answer is no, then you are choosing euphemism over reality and turning a blind eye to basic biology. If your answer is yes--if abortion ends the life of another human being--how can you be possibly be neutral? That would be akin to saying, "I'm personally against child abuse, or pedophilia, or human trafficking..." You get the point. How does history view those who were neutral and/or accepting of the great travesties of their time? What about those who remained silent about the horrors of slavery in America's earlier days? What about those who remained silent during the Holocaust that claimed the lives of at least 6 million Jews?
We are at 61 MILLION BABIES and counting as the silent slaughter continues day after day and year after year. Don't tell me we cannot legislate morality. How will future generations look back on our hard-hearted apathy. LIFE. IS. PRECIOUS. Regardless of the circumstance. Regardless of the chromosome count. Regardless...
Don't stand on the sidelines of history. Let your voice be heard. Stand up for life. Cherish life. Vote for life. Future generations are counting on us... 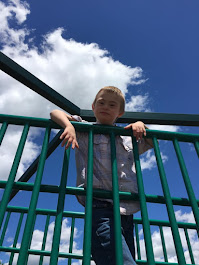 Reflections from Holland: A New Mother's Journey with Down Syndrome

My book inspired by this blog is available in paperback and Kindle edition from www.amazon.com. 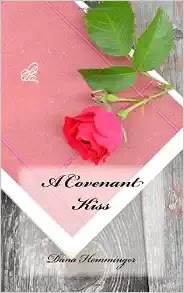 My latest book shares Shawn's and my love story with a call to the value of sexual purity.

Dana
First and foremeost, I am a lover and follower of my Bridegroom King Jesus Christ. Without Him, I would have no story to tell. I am happily married to my best friend and the love of my life Shawn. I am also privileged to be a stay-at-home mom for our beautiful children Benjamin, Joelle, Josiah, and Ava. I love to express my heart through writing and song. Thanks for reading! (photo by Simple Reflections Photography www.facebook.com/yoursimplereflections)